Musicians For Harmony was founded by violinist and musical emissary Allegra E. Klein as a response to the tragic events of September 11, 2001. Musicians and New Yorkers from all walks of life came together on the first anniversary to remember the victims and bring solace to one another. Their goal was to foster dialogue and cross-cultural understanding, unifying and inspiring people through the universal language of music. Renowned chamber ensembles and world music artists performed on the same program, donating their services to raise money for peace-related nonprofit organizations. The first sold-out concert was broadcast live on WNYC public radio and received the highest critical acclaim.

In 2003, Musicians For Harmony founder Allegra Klein traveled to Baghdad to meet the Iraqi National Symphony Orchestra. This pioneering trip gave the INSO’s musicians more than much-needed sheet music and strings for their instruments – it was the first time since the U.S. incursion that an American artist visited the war zone in order to make music with them. This cultural diplomacy was continued in July 2007 when Ms. Klein returned through a U.S. State Department-funded program to teach musicians and artists gathered in Erbil from all over Iraq. There, she introduced the Suzuki Method of teaching orchestral instruments to small children, receiving overwhelming support for this idea, and conducted a youth orchestra made up of talented students from Baghdad, Erbil, and Suleymania.

As an outcome of this visit, Musicians For Harmony launched its “Mentorship Program” in December 2007 – a distance-learning project that offered advanced instruction on orchestral instruments to the most talented students of Baghdad’s Music & Ballet School. Ms. Klein returned to Iraq in August 2009 to help launch the first-ever National Youth Orchestra of Iraq with Zuhal Sultan, a gifted young pianist whose vision of a unified Iraq resulted in the creation of NYOI.

From 2007 to 2011, Musicians For Harmony’s educational arm extended its message of “peace through music” to the local community’s younger members through its “Music of the World” workshops. This series of six, 90-minute sessions was led by professional teaching artists including master percussionist April Centrone, with guest musicians from five different regions of the world. Reflecting the organization’s musical quality and collaborative approach, the workshops were designed for public school students in New York City’s poorest school districts in collaboration with the Brooklyn College Community Partnership.

Musicians For Harmony commemorated its 10th Anniversary in 2011 with performances by the Juilliard String Quartet, clarinetist Kinan Azmeh, pianist/composer Dinuk Wijeratne, guitarist Kyle Sanna, shakuhachi performer Kojiro Umezaki, singer Naji Youssef, and the late Lebanese artist Bassam Saba with his New York Arabic Orchestra. We will celebrate our 20th Anniversary on September 11, 2021, by lifting up musical voices in the service of peace, health, and equity to remember the victims of 9/11, Covid-19 (including Mr. Saba), and social injustice. 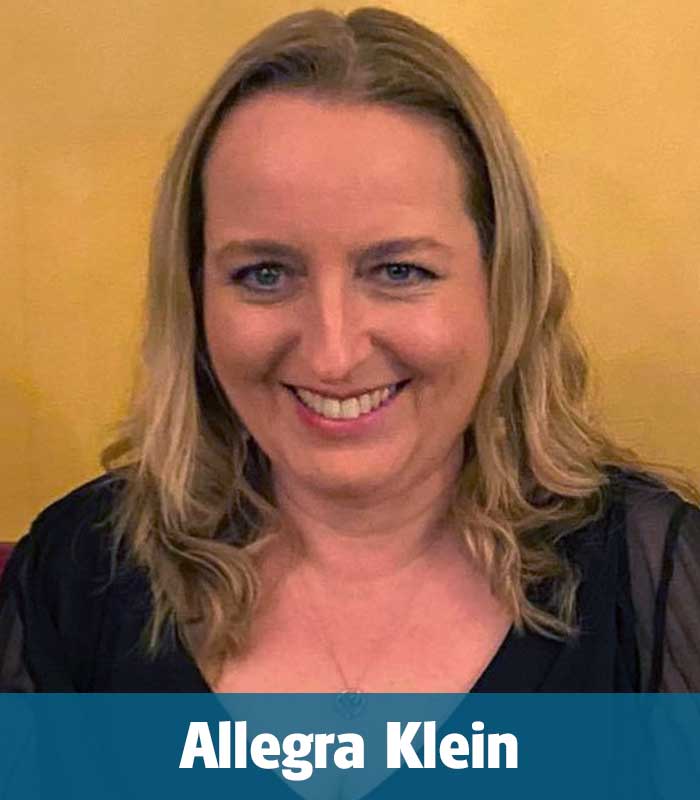 Allegra E. Klein is a global development expert with a decades-long career in music and non-profits. Originally from New York City, Allegra received her B.A. in Music from Harvard University and became an arts administrator for such iconic institutions as Carnegie Hall and Sony Music.
Shortly after September 11, 2001, she founded Musicians For Harmony, an organization dedicated to advancing peace and cross-cultural dialogue through music. As part of this mission, she traveled to Baghdad in 2003 to bring musical instruments and supplies to the Iraqi National Symphony Orchestra, and returned in 2007 to teach for the first-ever Iraqi Unity Performing Arts Academy. Her articles about these trips were published in Strings and Symphony magazines, and her work has been profiled in the New York Times, New York Sun, New York Daily News, and Chamber Music magazine.

In 2006, Allegra spoke at the United Nations about the role of the arts in educating girls in developing countries, and was invited back the following spring for a roundtable discussion on how the arts can bridge gaps between cultures. A former member of the American Symphony Orchestra League’s Youth Orchestra Division, she served on panels for the League, the New York City Department of Cultural Affairs, and the Westchester Arts Council.

After co-founding the Iraqi National Youth Orchestra with pianist Zuhal Sultan in 2009, Allegra relocated to Baghdad to serve as Director of Development for an Iraqi woman-owned company. During her tenure, she oversaw dozens of training and capacity-building projects for the United Nations, U.S. Department of State, World Bank and other international organizations. In 2014, she became Chief Operating Officer for a global talent firm in northern Iraq and established a Corporate Social Responsibility division to aid Syrian refugees.

In 2016, Allegra returned to the U.S. and obtained her Master’s of Business Administration from the University of Connecticut, where she co-founded UConn’s Net Impact Graduate Chapter and instituted the university’s first international MBA Sustainability Case Competition. She was inducted into UConn’s Hall of Fame in 2018 and currently serves as Director of the Panel of National Pathology Leaders, a non-profit “think tank” advancing best practices in pathology and laboratory medicine. 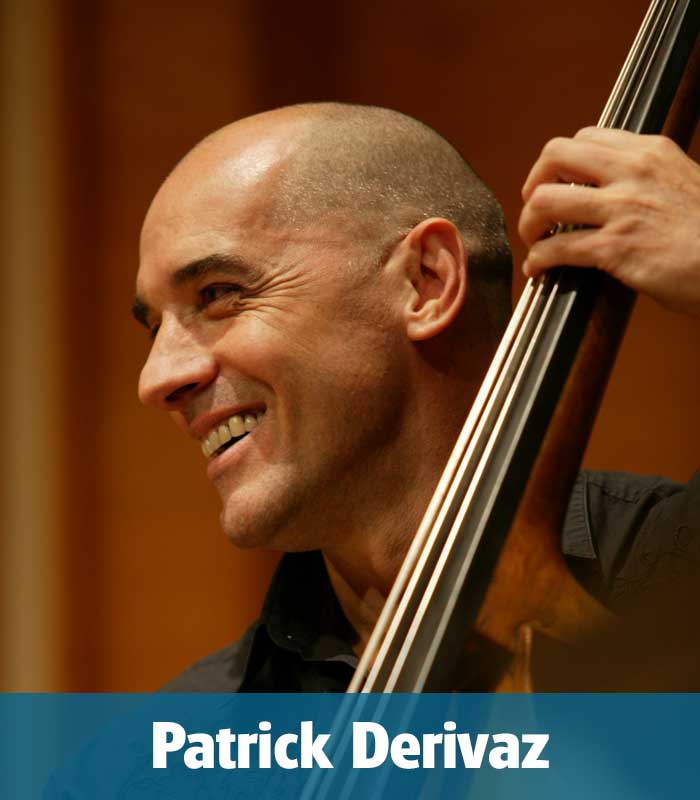 Born in France, Patrick studied music at the Conservatoire d’Aix-en-Provence, taking classes in Bass, Solfege, Harmony, Orchestra, and Electroacoustic. He lives and works in New York, and holds French and American citizenship. Partick composes, performs, records, mixes and produces a wide range of innovative and cross-cultural styles of music.

He has taught and currently lectures at FIT and NYU, and was the Artistic Director and Vice President of Musicians For Harmony from 2002 to 2008. His work includes the design and creation of all sonic elements and music for the Audubon Society (Prospect Park, NY) and the Creative Kids Museum (Calgary, Canada). Patrick has served as Front of House Sound Engineer in major US clubs, and the Barclays Center stadium, and at outdoors festivals, including Summerstage inCentral Park.

Patrick’s compositions have been performed at Merkin Hall with the Guarneri, Julliard and Shangai String Quartets, and his work “Priere de Paul Cezanne” for strings was selected by Histoire d’Aix for the Cezanne Centennial in Aix en Provence (France). He was a featured composer on WNYC “Soundcheck”, and his piece for kora “Couleurs du Marche”, performed at Symphony Space, was reviewed by the NY Times (09-13-07).

Catherine Cho is recognized for her remarkable virtuosity, combining technical mastery of her instrument with an extraordinary and distinctive musicality. Praised by The New York Times for her “sublime tone”, she has appeared worldwide as soloist with many orchestras and chamber ensembles as well as in recital. Her repertoire ranges from the traditional works by Bach, Beethoven, Mozart and Brahms to those of Bartók, Korngold and Berg, in addition to music of our time.

Catherine Cho’s orchestral engagements have included appearances with the Detroit, Montreal, and Washington DC’s National Symphony orchestras, the Buffalo Philharmonic, the National Arts Centre Orchestra in Ottawa, the Edmonton Symphony, the Korean Broadcasting Symphony, the symphony orchestras of Barcelona, Haifa, and New Zealand, the Het Gelders Orkest in Holland, the Orchestra of the Teatro Colon in Buenos Aires, and the Aspen Chamber Symphony performing with distinguished conductors such as Mstislav Rostropovich, Robert Spano, Sixten Ehrling, Hugh Wolff, and Franz-Paul Decker. A regular guest on tour with “Musicians from Marlboro”, Ms. Cho has also been a frequent participant in their summer Music Festival in Vermont since 1993.

She has performed as special guest soloist with the New York City Ballet at Lincoln Center for two ballets by renowned choreographer Peter Martins including the New York premiere of his ballet Viva Verdi. Her concert performance of Vivaldi’s Four Seasons, with the Buffalo Philharmonic under the baton of Jo-Ann Falletta, was taped live and broadcast nationwide on National Public Television in January 2002. As a recitalist and chamber musician, Catherine Cho has performed on the prestigious stages of Alice Tully Hall with the Chamber Music Society at New York’s Lincoln Center, the Mozarteum in Salzburg, the Casals Hall in Tokyo, the Seoul Arts Center, the Kennedy Center for the Performing Arts in Washington, DC, the New York Metropolitan Museum of Art, the Isabella Stewart Gardner Museum of Boston, and on Ravinia’s “Rising Stars” series in Chicago.

Devoted to the cause of promoting peace through music, Catherine Cho was VP of the Board of Musicians For Harmony for several years, and is an artist member of Music For Food, a musician led initiative to fight hunger in our local communities. 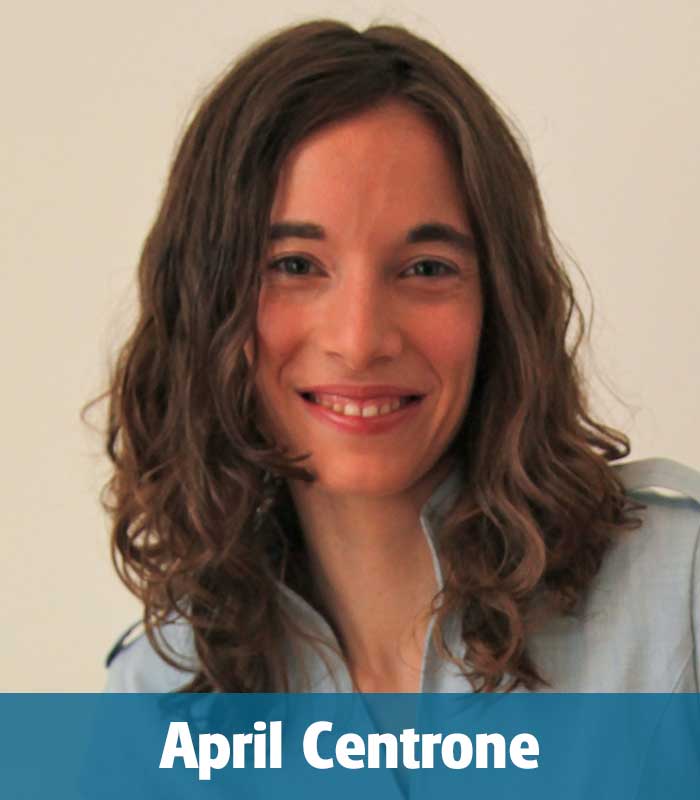 April Centrone is a multi-instrumentalist, teacher, composer and music therapist based in NYC / NJ. She is a Carnegie Hall World Explorer 2020 musician and educator, business owner of 10PRL, arts/film/event space on the Jersey Shore, and co-founder of the New York Arabic Orchestra, non-profit organization specializing in the performance and education of Arabic music. She currently teaches world music at William Paterson University and has held lectures in music therapy and Arabic music/percussion at Taipei University of the Arts, Lebanese American University and others. She has worked extensively with inner-city schools throughout NYC’s boroughs with project such as Yo-Yo Ma’s Silk Road Connect. She has performed in venues such as the United Nations, Carnegie Hall and Lincoln Center and has toured throughout Europe, the Americas, Middle East and Far East.

She has toured with Arab icons including Ziad Rahbani, Bassam Saba and Marcel Khalife, among others. She conducted a ‘Music Therapy Tour’ with the U.S. Embassy of Malaysia, holding workshops at Rohingya refugee youth centers and safe houses for young Malaysian women. During her residence in Lebanon from 2013 to 2016, she held Arabic music workshops for Syrian and Palestinian refugee youth through her project Juthoor. She currently teaches group and private instruction in percussion and ‘ud and leads therapeutic drum sessions. April strongly advocates female empowerment in her teaching and compositions. Her debut album ‘New Moon’ is available on Spotify.   Centrone carries a Masters degree in Forensic Psychology from John Jay College, NYC.